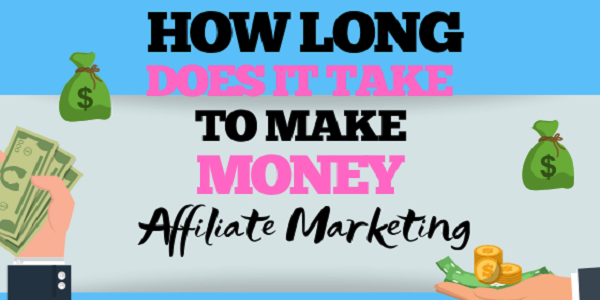 How Long Does It Take To Make Money With Affiliate Marketing

I was asked recently if I start affiliate marketing today how long is it going to take me to start making money. This is a great question and really an important one because most people that get into affiliate marketing go into it with the wrong expectations.

This of course leads to failure because people aren’t succeeding as quickly as they thought they would and so they give up, thinking they’re doing something wrong and never make a dollar online. That’s the vast majority of people that get into affiliate marketing.

The no BS answer to this question is it’s gonna take about six to twelve months minimum to make a decent amount of money consistently.

Now once in a great while there is somebody that just gets lucky and they happen to fall into the right niche at the right time and they might start making money a little bit sooner than that.

Just to give you an idea, I have about a dozen different affiliate marketing websites out there right now and anytime I launch a new site I plan on it taking a year before it makes any significant consistent money.

Sure, I’ll make money way before that, 10 dollars here, 30 dollars there but to get to the thousands of dollars range it’s going to take around a year.

The Importance of Learning and Focus

Maybe some of these phrases I’m using don’t even make sense to you now. That’s okay as long as you get started and you start learning and you do a little bit every day to grow your business.

You will end up succeeding in the long run but it’s not going to be this week, it’s not gonna be this month. It’s going to be around six to twelve months.

When you’re first starting out focus on building a great website with as much valuable content as you can and learn as much as possible. As you start progressing things are will start to get easier for you.

After about a year hopefully you have 200 posts up, maybe more than that. If you can add just one post of content every day, after a year you’ll have a website with more than 350 posts.

Now most of us can’t create that much content, especially if you’re doing this on a part-time basis because you’re also going to be learning and doing research and things like that as well.

But if you can have at least 100 posts up within about a year and you’ve done your keyword research then you can realistically start making decent money.

Even if you have that many posts up in a month or two it’s not really going to matter because it takes time for websites to rank well on search engines.

The search engines is really where the vast majority of your traffic is going to come from. You could focus on social media and YouTube and some other sources as well but really search engine traffic will be your number one source of traffic and income in the long run.

Now Google and other search engines have what’s called the sandbox. If you have a new website they’re not going to rank you well right away.

It’s going to take time to build trust with the search engines to know that you’re not trying to game their algorithm, that you’re not giving people viruses or doing anything unethical.

Slowly over time Google will start start ranking your pages for those keywords you’ve researched. Like i said before, it will take time to get out of that sandbox so that you can play with everybody else on the big boy playground.

Until that point you’re not going to get a whole lot of traffic even if you have a great website filled with great keyworded content.

How Long Is This Going To Take

So the quick answer to your question “how long is this going to take” is if you’re working on this maybe an hour or two a day or maybe between like 7 to 10 hours a week I think the realistic expectation is about one year.

You can start making decent money at affiliate marketing at that 1-year mark. It might not be a full-time income at that point but it might be several hundred dollars a month or a thousand dollars a month and you can build on that.

The income really generally tends to snowball at that point. Once my sites start making money that first full year I’m usually able to double that the next year and then double again the year after that and I’ve done this with several of my different sites.

The question you have to ask yourself is if you’re willing to put in the effort and push yourself past where most people quit, which is usually around the 3-4 month mark.

If you can get past that point and continue with posting valuable content for a year you’ll see success. In the grand scheme of things a year really isn’t that long. I mean think about where you were a year ago and next year your life could be changed.

This is a business that doesn’t take a whole lot of capital to get involved in. You can do it part-time, you don’t need an office and you don’t have to quit your job.

So while a year seems like a long time to be putting in all this effort creating a website for nothing until 6 months to a year later it’s the no BS answer, it’s the truth. It’s really not that long when you consider the lack of risk and financial capital that you have to put into it.

So if you start today, try to focus on making it one year. Do something for your business every day even if it’s just five or ten minutes maybe just learning something, reading an article or writing just a paragraph of content for your site.

I hope this post has given you an idea of how long does it take to make money with affiliate marketing and I hope you take action. I know it’s not the answer you were probably looking for but it is a harsh truth if you’re wanting to build a business with your website content.

Now of course you may be more comfortable with having a YouTube channel where you don’t have to write so much content but you will still have to follow the same commitment as far as providing valuable content consistently and keyword research.

Andy Halfell has a great training course called the Passive Affiliate System if you’re thinking about going the YouTube route.

If you have enjoyed this post please leave a comment and share it with your friends. Make sure to check out some of my other posts that will help shorten your learning curve.

If you're serious about becoming successful online and building a life-changing business, I highly recommend you register for our next webinar while it's still free! Learn from my mentor, John Thornhill. John has been a successful Internet Marketer making a full-time income online since 2004 and coaching many thousands to make a full-time income too. FIND OUT HOW -> Register here and book your place on his next webinar. PS - On this webinar, you will learn the ultimate 24/7 automated business that every successful marketer is doing, and if you’re not doing it you really are missing out - register today while this offer is still available!

Want The Ultimate Guide To Internet Marketing For Beginners? Join Our Community