Hello guys and gals, in this post we’re going to go over how you can make money on YouTube without ever actually filming any videos, without being in front of the camera or without even owning a camera.

Alright so jumping straight into it. There’s people out there making $100 a day from this but if you’re serious about this and you’re really committed to growing this into a legitimate business there’s people making a couple thousand dollars a day from this.

Now before you proceed if you’re actually interested in doing this and making money with this make sure you don’t skip around this article. There’s a few critical points that I talk about that are crucial to your success.

The main thing is to do this correctly and legally, so don’t skip these points and I’ll make it worth your time.

So you might be thinking ok if I’m not filming videos what am I going to do, how am I going to make these videos? I can’t just take people’s videos, steal them and monetize them on my channel and you’re right that is illegal, you can’t do that. But here’s what you can do.

The first type of video you can make is a compilation type video but again you can’t just repost other people’s content illegally. What you can actually do is if you go on YouTube and let’s say you want to do some sort of top 10 Fitness related video.

So if you actually type in Fitness in the YouTube search bar and then go to filter and hit Creative Commons, YouTube is going to show you videos that are you’re allowed to take for yourself.

All of these videos in the creative commons section are videos that people uploaded for other people to use. It’s fair game for you to take these videos and make a top ten video out of them and monetize them.

Let’s stick with the fitness niche here for a second and show you guys what could be a potential video that you can make. So let’s say you type in biceps workout and filter Creative Commons.

You will then see all of the videos in Creative Commons, they’re fair game for you to use. What you could do is download some of these videos, find the best ones, put them into one video and title it “top three bicep workouts 2019 for beginners.”

You want to name it something catchy, something that’ll get clicks. Because the videos you use have creative commons it’s completely legal and YouTube is completely fine with you using Adsense to monetize that video.

Fitness is obviously not the only niche that you can do this with, another example would be sports. You got to be a little more specific, let’s say you type in soccer on YouTube or soccer tricks.

Go on and filter to creative commons and you’ll see some soccer tricks. What you can do is make a video titled “top ten soccer tricks in 2019.” People watch a ton of sports compilations so this would also be something that you could get into.

Another really good niche that I would recommend you guys get into it would be gaming. Let’s say you type in Fortnight and go and filter Creative Commons. A bunch of Fortnight videos will come up and all these are fair game for you to use.

The reason why this is a good niche to get into is this is the type of content that kids watch and kids watch a ton of YouTube. They binge watch YouTube so if you can get in a niche that kids like and make compilation videos there’s a ton of money to be made.

All right, so that’s one way you can do this. You can make these top ten compilation type videos but there’s also another way, another type of video that I want to talk about.

These are videos that people make that showcase like we say YouTube drama. Let me give you guys an example of what I mean. There’s a channel called Jack that’s doing this really well.

If you go on their videos you can see that they’re doing stuff like James Charles being an iconic sister for ten minutes, ten minutes of Jeffrey stars shading youtubers, that kind of thing.

Now here’s the thing, you can’t just blatantly take youtubers videos, upload them and start making money off of them. What this channel is doing is that they’re finding different snips of these youtubers videos and they’re making a different type of compilation with it.

Now the thing with these is that they’re not Creative Commons videos so it’s very possible that these videos can still get a copyright stripe and that’s really not the end of the world.

All that’s going to happen is that she’s going to get a choice to either delete this video or to remove all the ad revenue from this video and keep it up.

So to the channel making this video it really doesn’t have any negative effect on them except that they won’t make money off this video so it’s really not the end of the world.

But the thing is if these people saw the videos that this channel is making on them they really wouldn’t want to copyright strike them. This is because this channel is just offering these youtubers free exposure and free publicity.

If they copyright strike these videos then the person behind this channel is gonna be like okay, this person doesn’t like it when you post their videos and I’m not going to post anything about them anymore.

Another reason why it’s such a good idea to make these types of youtuber videos is that when people search for these videos or when they’re watching these people’s videos you start getting noticed in the suggestions videos.

If you put David Dobrik being funny for ten minutes or something and you made a video on it it might show up in the suggestion part of David Dobrik videos.

Because you’re making videos on a very popular topic and it’s something that people are already searching for it’s a lot easier to grow and to actually get views with this type of video.

Now that you kind of have a grasp of this whole concept let’s actually talk about how much people are really making this type of thing and how much you can make.

So on YouTube there’s a thing called CPM which is the dollar amount that you make per 1000 views and it varies anywhere from $1 to $10 per thousand views.

Usually the channels that make the most money are educational type or series type channels and the lowest are like prank videos and stuff like that.

Prank type videos and videos like that just don’t get that much money from ad revenue but on average on the lower spectrum it’s some around 3 dollars per 1,000 views.

Let’s just use that for our calculations, let’s say that these videos are making three dollars per 1,000 views which is a very low estimate but let’s start off with that.

So the more YouTube videos you have on your channel obviously the more money you’ll probably be making. A channel like this is making a ton of money but let’s go and look at some other videos.

Let’s go back to that Fortnight example, type in top ten fortnight or something like that then let’s go and filter then sort by view count. You will then see the top 250 funniest fails in Fortnight.

72 million views for this example, so let’s see how much that’s going to make them if they’re getting a lower one dollar CPM. 72 million divided by 1000 equals 72,000.

If they had like a three dollar CPM 3×72,000 that would mean they made $216,000 from this little Fortnight video. Getting 72 million views on a YouTube video is extremely unlikely but it’s still possible.

So really there’s nothing stopping one of you guys from doing this type of thing and making money with it and it’s not like this 72 million views is an anomaly.

If you do this search you will see right under it is another video that is very similar and they got 66 million. Other ones got 29 million, 25 million, these videos get views.

So the most obvious way of making money from your YouTube videos and the whole CPM thing I just went over is from Google Adsense. That is the actual platform that you connect your YouTube channel to that puts the ads on your videos.

It’s a very simple process to set this all up all you really need is to meet their little threshold for your watch time and your subscriber count and you’ll be off making money through Google Adsense.

Let’s say you’re making these YouTube videos to start getting a ton of views but you keep on getting copyright strikes and you know Google Adsense just doesn’t seem to like the videos you’re making.

You can actually still make money off of that YouTube channel without Google Adsense through stuff like selling merch or affiliate marketing.

Let’s say you have a popular fitness channel doing these type of reposting videos. You can start selling fitness clothing, fitness accessories, etc. You can even go the affiliate marketing route and start selling someone’s fitness course.

Even if you do get your YouTube videos monetized it’s still a good idea to try some affiliate marketing or sell some merch and get some extra money on your videos that way.

Learn more about: Creating YouTube Videos That Get Results

Make $100 Per Day On YouTube Without Making Videos – Conclusion

I know it sounds unbelievable to make $100 per day on YouTube without making videos but people are doing it everyday. Finding a certain niche like the ones I’ve mentioned above is a great place to start but don’t let that limit your imagination.

There’s thousands of potential niches to grow your income but you will have to put in the work of downloading the legal videos, editing them, naming them with a catchy title and making an eye catching thumbnail. Are you willing to put int he work to see the results?

That’s going to be it for this post and I hope you enjoyed it. If you did make sure you leave a comment down below. I try and get back to all of my comments. 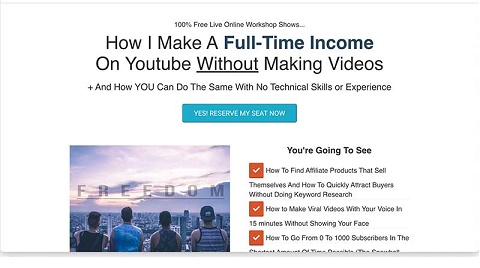